Choosing the right mouldings to match the era of the house took a bit of research - both online and in hardcopy. Both of the Finlayson and Woodworker's websites provide guides on the style's of mouldings used during the various era's and online blogs, real estate guides etc can also help with the decision making.

Personally, it wasn't a lack of inspiration that I felt was missing, but the level of detailing that I wanted to know. For example, what height is that skirting board? Is that an original hallway fretwork arch? What height should a picture rail be put? Hence, my blog may be of assistance to someone else in the same situation.

Here are a few tips I learnt along the way. There is no set height that a picture rail should sit. Our 'base' height was the top of the breezeways in the upstairs hallway. Keep in mind though, as we learnt, the fanlights above your french doors won't necessarily be the same height as the top of the breezeways so it can be difficult to establish an exact match throughout the house. But isn't it the imperfections in a Queenslander that give them their character? A few things to consider: the height of your french doors, internal doors, breezeways and fanlights plus any internal cupboards. We had 2.34m high built in wardrobes and linen cupboard so the picture rail definitely couldn't be lower than than but still had to sit a comfortable distance from the ceiling cornicing. This was particularly the case, as when we raised the house we lifted it to the maximum height possible for our council precinct. This gave us approximately 2.75m high ceilings downstairs. We therefore elected to have picture rails downstairs throughout the house as it looks so good against the timber T&G used to clad the internal walls. This lower height downstairs, however, meant that the picture rails downstairs had to be situated at the midway point of the fanlight so as to not be too close to the ceiling cornicing, but still high enough to function as an effective picture height rail. We didn't install them just to look good, they also had a function to serve!

More tips...the 140mm skirting boards looks really good. It's pretty much the standard height people associate with a Queenslander, and personally, i think anything shorter looks out of place. There are a range of skirting boards available and while I wanted to be traditional, I also didn't want to spend loads of hours cleaning skirting boards that attracted lots of dirt and grime because of their profile. In my world, traditional is best but practicality has to have a place. That said, the profile of a picture rail clearly attracts dust but it's up high and I can't see it as easily. Ok, sometimes objects that look good are worth the extra effort!

Cornicing. Again, there is no standard cornicing to fall back on. With the high skirting board and detailed architraves and picture rails, we felt a small simple cornice would best suit this house and match with the style used during the 1930's. I spent weeks scouring magazines and online sources trying to decide what looked best, but in the end, the cornice that I first saw was the one that still fitted best in my mind.

Architraves. Well we tried to match the original architrave as best as possible, but upon closer inspection of the original house, there were actually at least three different types reflective on which era that had been previously installed or renovated. Since many of the doors and windows had been changed there was not a lot of original architrave left so we chose a 68mm (again a fairly standard width) architrave that looked like it best matched the skirting board.

Cornering / Edging. I'm not sure if that is the right word, there doesn't seem to be one that I know of. The "cornering" as I tend to call it, is a small piece of timber that our builders used to wrap around the T&G timber when the wall reached a corner such as the hallway butting into the lounge room and kitchen area. This piece of dress timber hides the T&G edging, protects the timber from vacuum cleaners and children's toys etc who may bump the corner and cause it to "fray" along the edges so to speak. I think it looks pretty damn swish. I hadn't even thought of it until my builder put it up, and I'm glad he did! Its a great practical and aesthetic solution that really works.

Hallway arches. There was a single timber hallway arch left in our original house. The others were long gone and the iron garden type arch used some time long before our renovation, looked very out of place and highlighted the mismatch of styles. We used our single arch as inspiration and got the closest looking archway to match. It was a different height to the original, however, so we used the original downstairs as the only fretwork feature downstairs. It sits in front of the stair landing at the entrance to the downstairs hallway providing, hopefully, a link between upstairs and downstairs. We got the archways at a great price as part of a closing down sale, along with the bifold doors, so while they were new, they are made of solid red cedar and a faithful reproduction of the original.

Heritage archway. When we made our extension to the house we widened the lounge room by 800mm and had an overhanging bulkhead where the structural beam sat. This left an opportunity to put a room divider style archway below the bulkhead and frame the reclaimed french doors that sat just behind it. This decision was either going to work well, or fail fantastically. Basically we wouldn't know until the pieces were help up in place as to whether it would look out of place or not. Fortunately, and I hope you'll agree, it has turned out rather well and made a feature out of the bulkhead rather than a clear addition to the space.

We also used a 1.2m width hallway arch in the doorway between the bedroom and dressing room. We did this for several reasons. Firstly, this was a structural wall that had divided the room from the original pantry removing it would be a) very costly, and b) lose the traditional footprint of the house. We decided to work with the space, and use it as a dressing room, rather than have a very large master bedroom. Given that the window was in the dressing room, it made sense to have a wider doorway to allow natural night to filter through, while framing the lovely reclaimed hopscotch window we'd picked up from Gumtree in Annerley, Brisbane. Once the built-in wardrobe is installed, there will be a lovely window seat under the window, with two pull out drawers (you can never have enough storage) that will hopefully give the illusion of more space while still allowing us to make the most of the small space.

As I write this blog, the finishing touches are still being installed. Mouldings can be fiddly and time-consuming to install so fitting out an entire house has taken awhile compared to a modern home. Still, even the in progress photos give the idea on how the finished product will look.

Details on mouldings we used are: 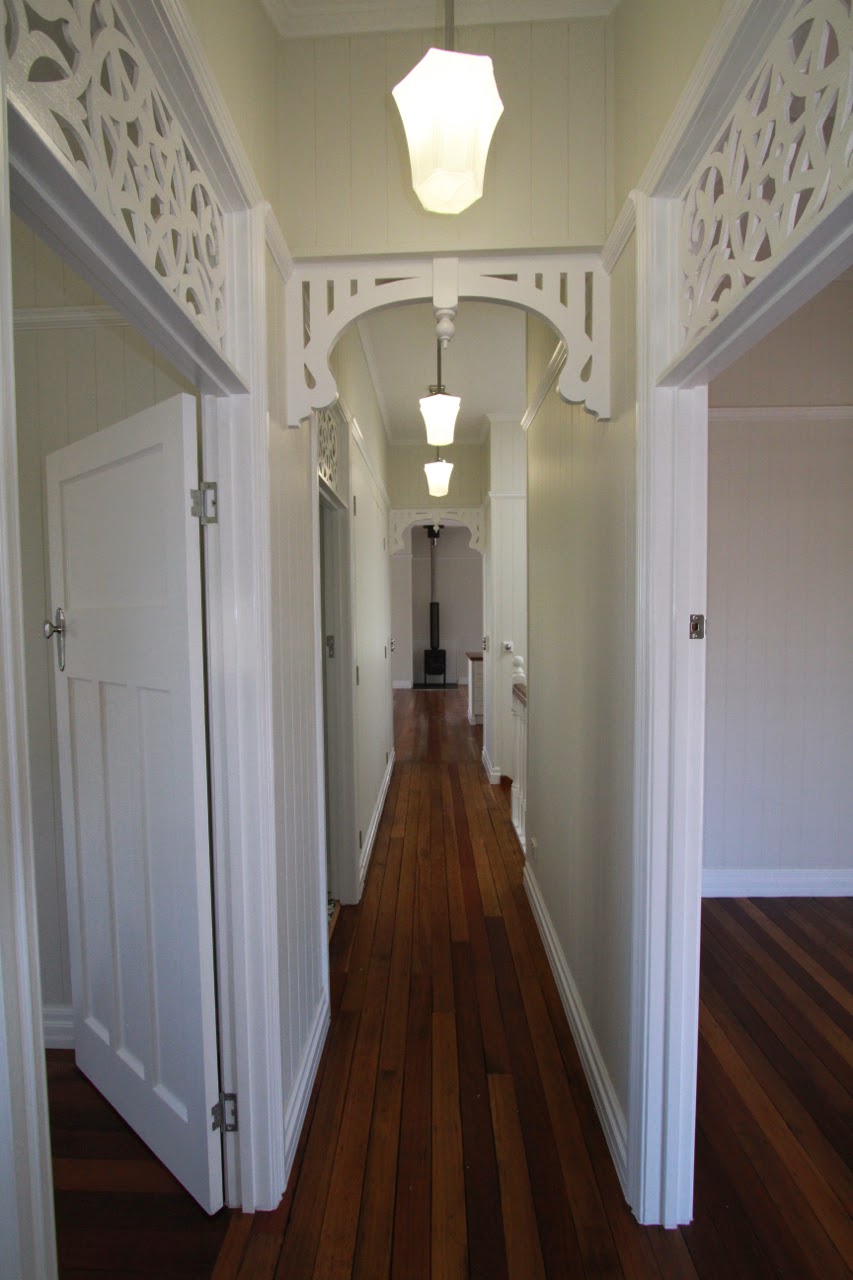 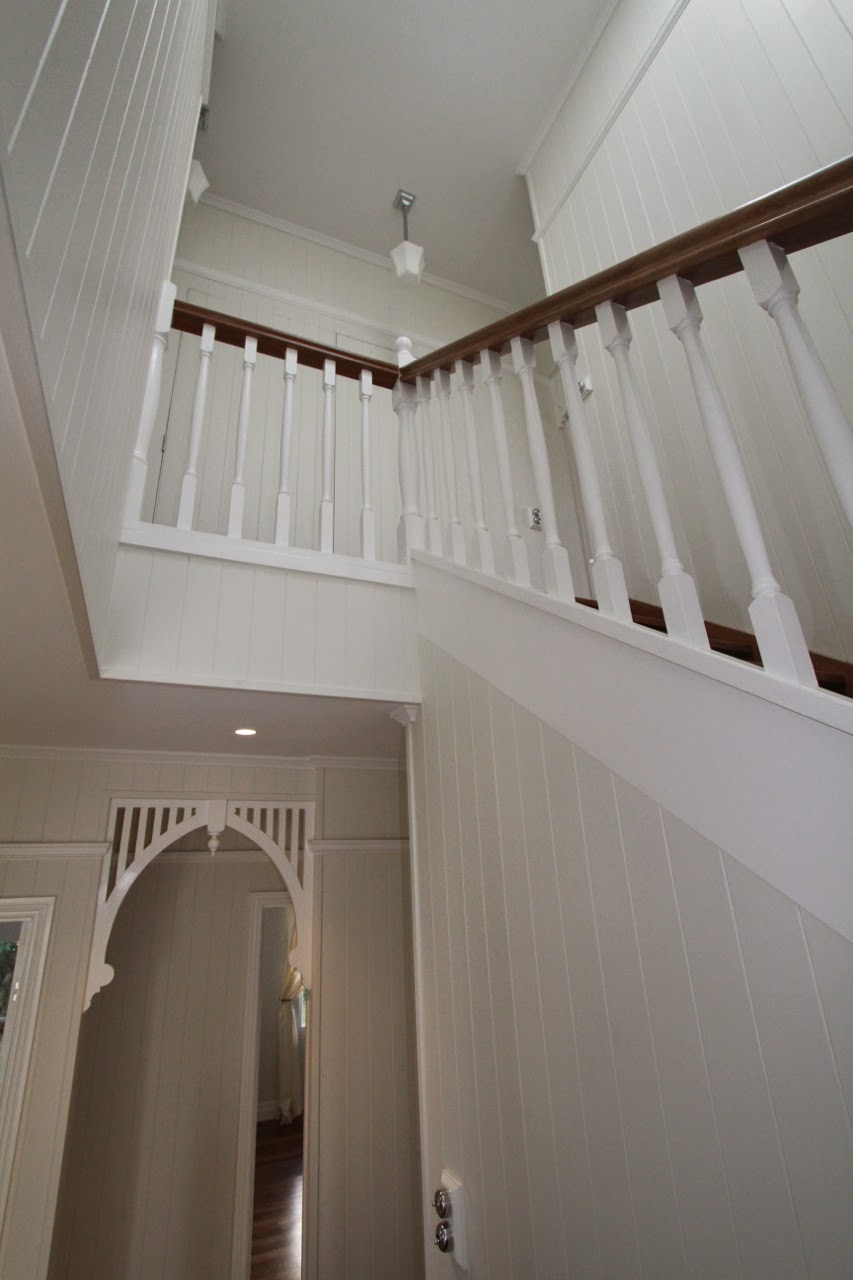 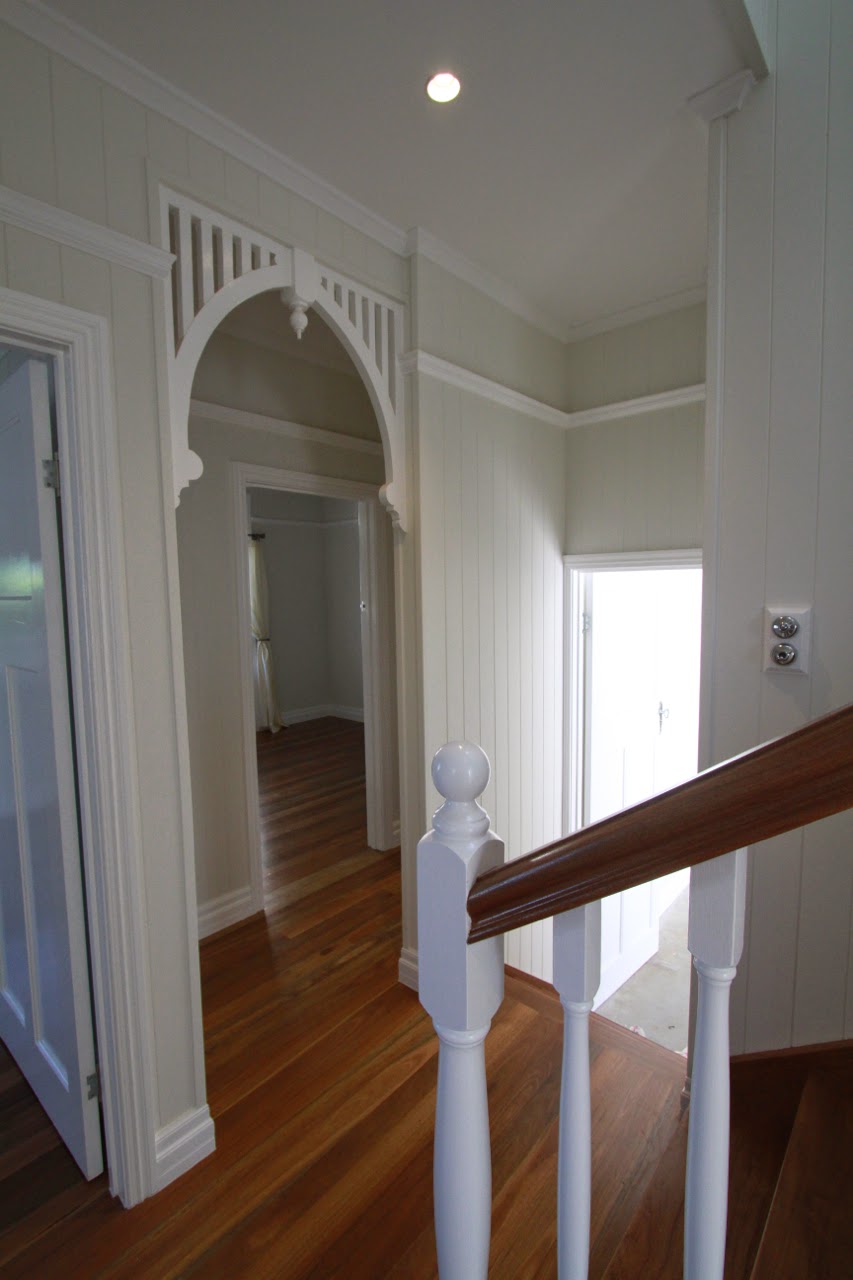 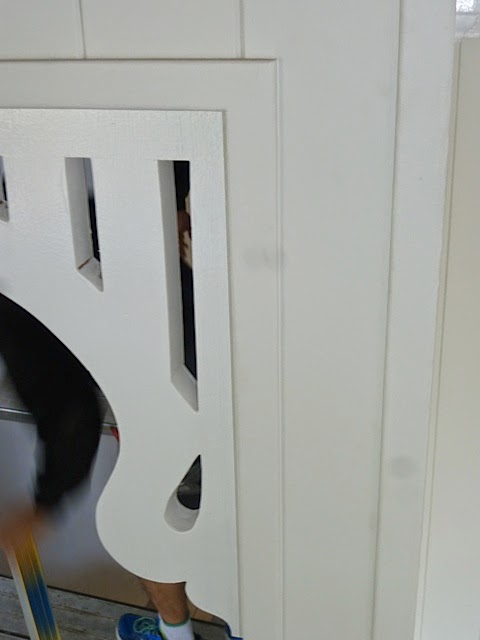 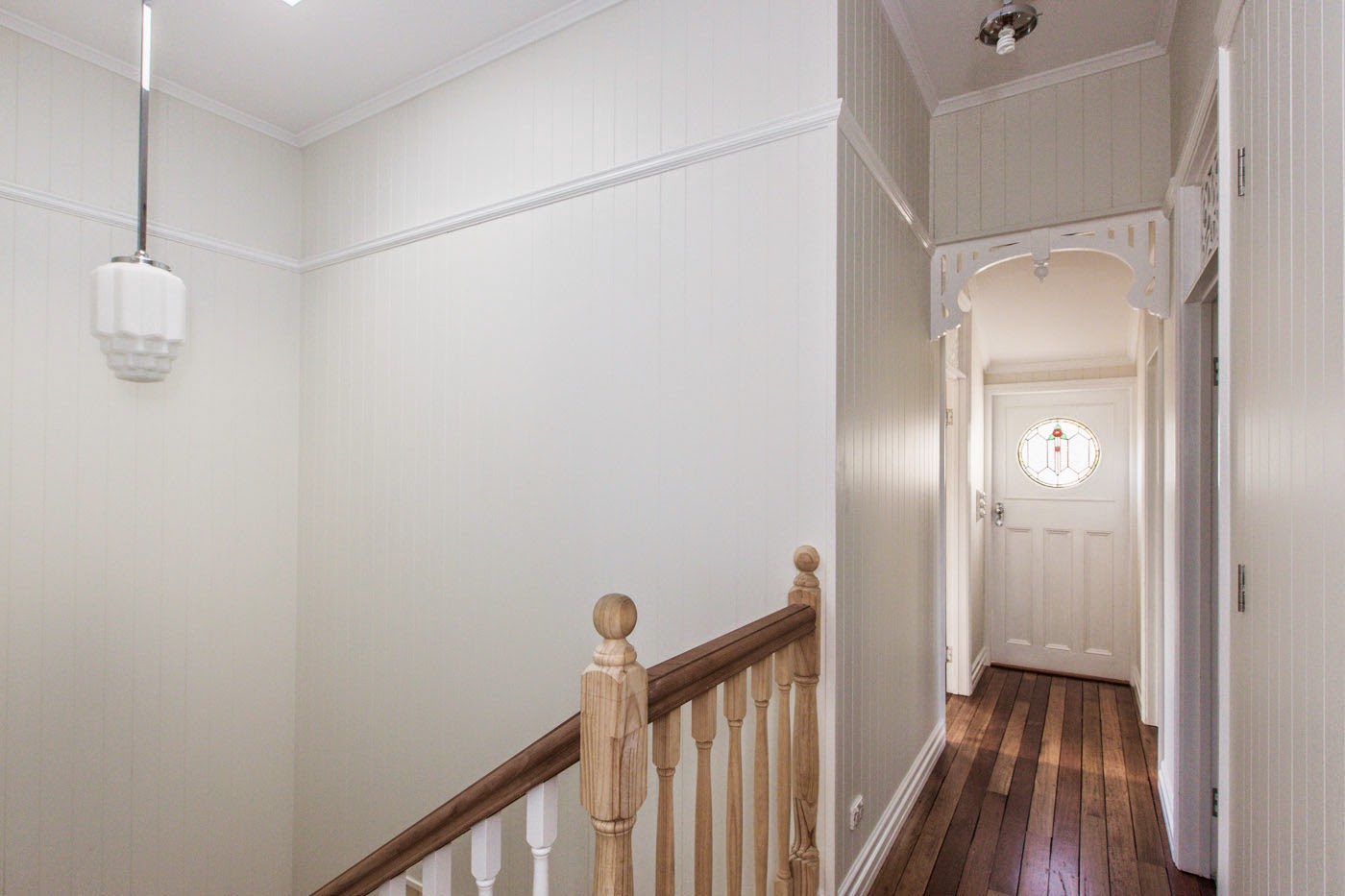 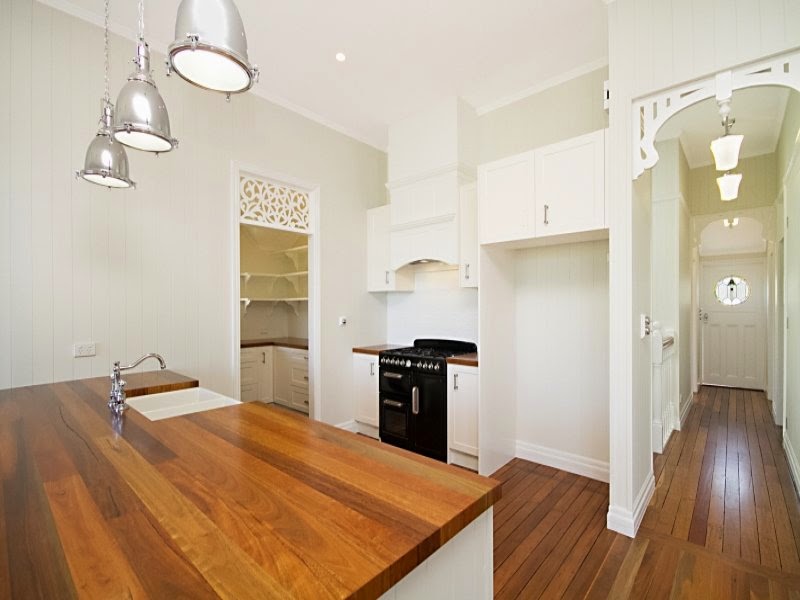 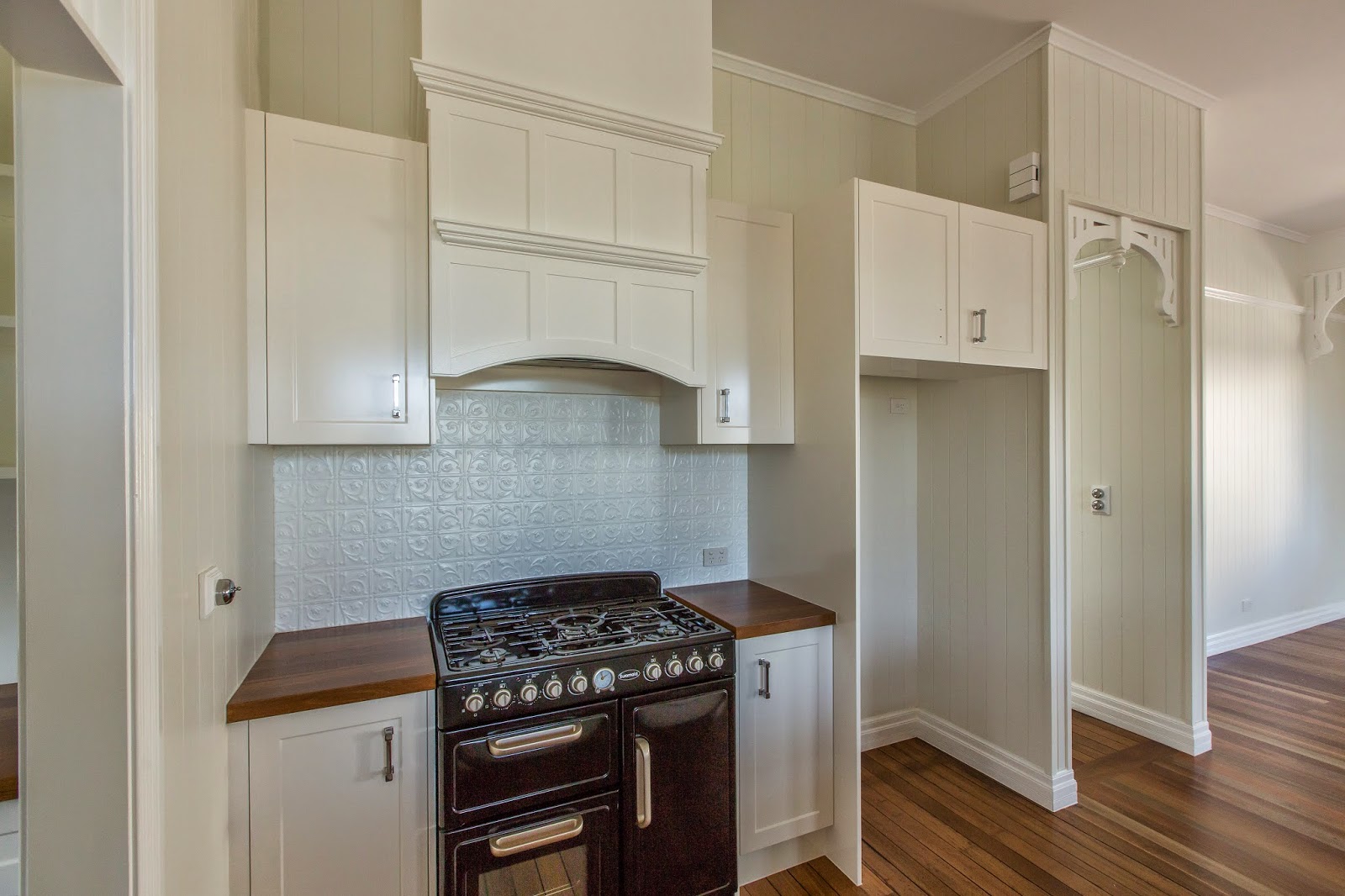 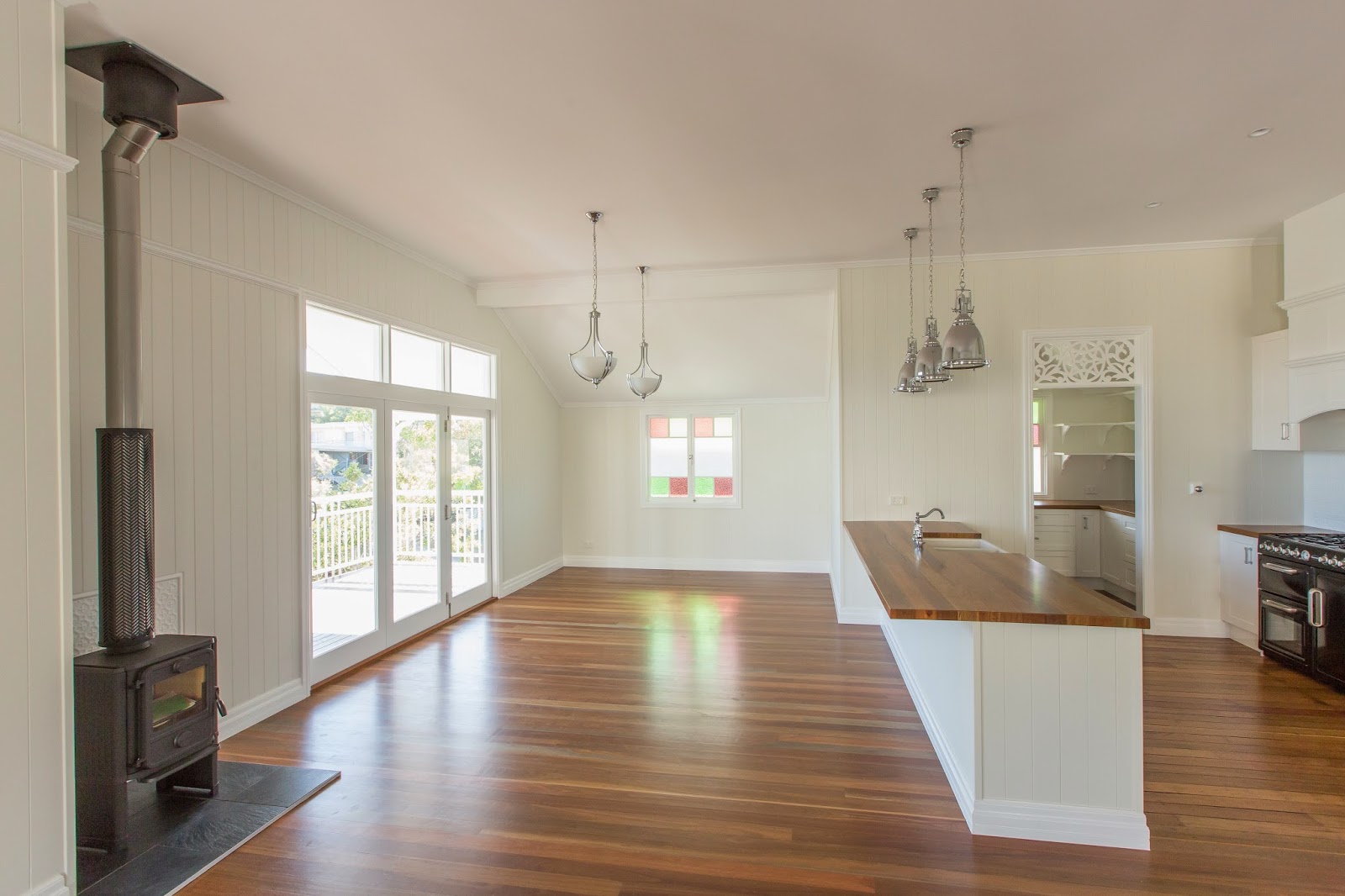 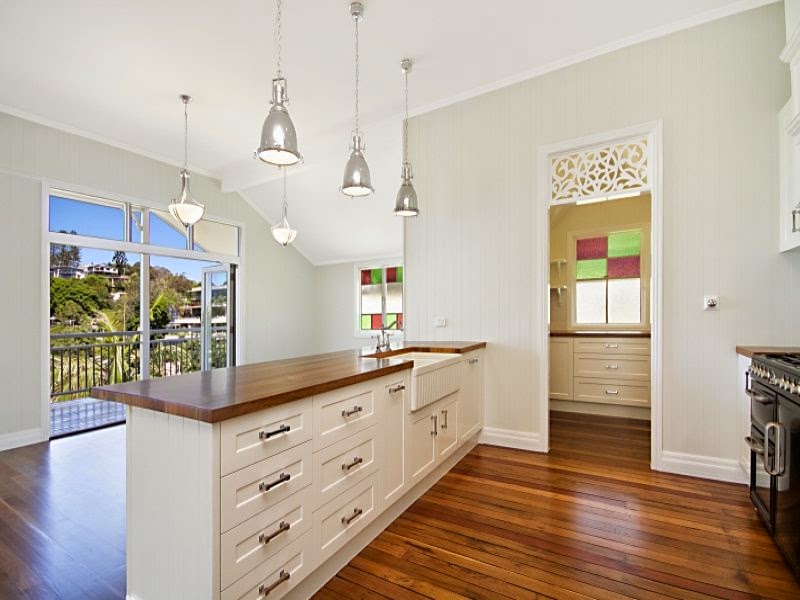 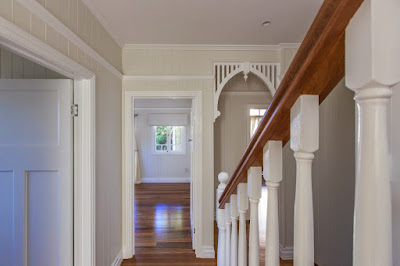 Kirsten
Renovate or detonate: The story of our journey to renovate a 1930's Queenslander. Whilst definitely not the sexiest blog title, these were the first words I typed to do an internet search when we bought our Queenslander home! I've started this blog to detail our home's story and the finishes we used to renovate our Queenslander.